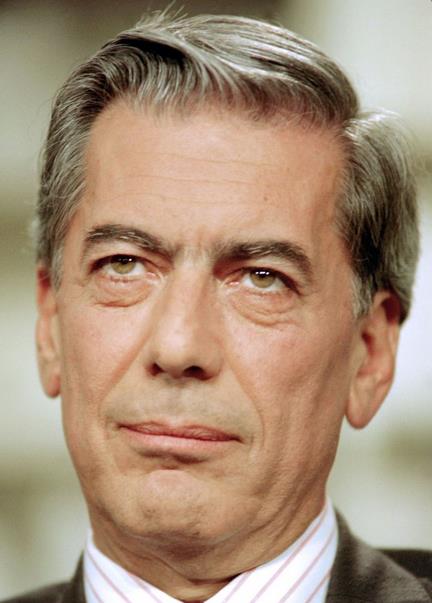 Conversations in the Cathedral

….
I'm not being nosy, but why did you run away from home that time, son?" Ambrosio asks. "Weren't you well off at home with your folks?"

Don Emilio Arévalo was sweating; he was shaking the hands that converged on him from all sides, he wiped his forehead, smiled, waved, embraced the people on the platform, and the wooden frame swayed as Don Emilio approached the steps. Now it was your turn, Trifulcio.

"Too well off, that's why I left," Santiago says. "I was so pure and thick-headed that it bothered me having such an easy life and being a nice young boy.

"The funny thing is that the idea of putting him in jail didn't come from the Uplander," Don Fermín said. "Or from Arbeláez or Ferro. The one who convinced them, the one who insisted was Bermúdez."

"So pure and thick-headed that I thought that by fucking myself up a little I would make myself a real little man, Ambrosio," Santiago says.

"That all of it was the work of an insignificant Director of Public Order, an underling, I can't swallow either," Senator Landa said. "Uplander Espina invented it so he could toss the ball to someone else if things turned out badly."

Trifulcio was there, at the foot of the stairs, defending his place with his elbows, spitting on his hands, his gaze fanatically fastened on Don Emilio's feet, which were approaching, mixed in with others, his body tense, his feet firmly planted on the ground: his turn, it was his turn.

"You have to believe it because it's the truth," Don Fermín said. "And don't tar him so much. Whether you like it or not, that underling is becoming the man the General trusts the most."

"There he is, Hipólito, I'm making a present of him to you," Ludovico said. "Get those ideas of being headman out of his brain once and for all."

"Then it wasn't because you had different political ideas from your papa?" Ambrosio asks.

"He believes him implicitly, he thinks he's infallible," Don Fermín said. "When Bermúdez has an opinion, Ferro, Arbeláez, Espina and even I can go to the devil, we don't exist. That was evident in the Montagne affair."


The feast of the Goat

…..
When she reaches the rear entrance of the Jaragua, a wide, barred gate for cars, stewards, cooks, chambermaids, porters, she doesn't stop. Where are you going? She hasn't made any decision. Her mind, concentrating on her girlhood, her school, the Sundays when she would go with her Aunt Adelina and her cousins to the children's matinee at the Cine Elite, hasn't even considered the possibility of not going into the hotel to shower and have breakfast. Her feet have decided to continue. She walks unhesitatingly, certain of the route, among pedestrians and cars impatient for the light to change. Are you sure you want to go where you're going, Urania? Now you know that you'll go, even though you may regret it.

She turns left onto Cervantes and walks toward Bolívar, recognizing as if in a dream the one- and two-story chalets with fences and gardens, open terraces and garages, which awaken in her a familiar feeling, these deteriorating images that have been preserved, somewhat faded, chipped along the edges, made ugly with additions and patchwork, small rooms built on flat roofs or assembled at the sides, in the middle of the gardens, to house offspring who marry and cannot live on their own and come home to add to the families, demanding more space. She passes laundries, pharmacies, florist shops, cafeterias, plaques for dentists, doctors, accountants, and lawyers. On Avenida Bolívar she walks as if she were trying to overtake someone, as if she were about to break into a run. Her heart is in her mouth. You'll collapse at any moment. When she reaches Rosa Duarte she veers left and begins to run. But the effort is too much and she walks again, more slowly now, very close to the off-white wall of a house in case she becomes dizzy again and has to lean on something until she catches her breath. Except for a ridiculously narrow four-story building where the house with the spiked fence used to be, the house that belonged to Dr. Estanislas, who took out her tonsils, nothing has changed; she would even swear that the maids sweeping the gardens and the fronts of the houses are going to greet her: "Hello, Uranita. How are you, honey? Girl, how you've grown. Mother of God, where are you off to in such a hurry?"

…..
Occasionally a man’s head will look out of some vehicle and for an instant her eyes meet a pair of male eyes that look at her breasts, her legs, her behind. Those looks. She is waiting for a break in traffic that will let her cross, and again she tells herself, as she did yesterday and the day before yesterday, that she is on Dominican soil. In New York nobody looks at a woman with that arrogance anymore. Measuring her, weighing her, calculating how much flesh there is in each one of her breasts and thighs, how much hair on her pubis, the exact curve of her buttocks. She closes her eyes, feeling slightly dizzy. In New York not even Latins—Dominicans, Colombians, Guatemalans—give such looks. They’ve learned to repress them, realized they mustn’t look at women the way male dogs look at female dogs, stallions look at mares, boars look at sows.

…..
Anxiously he inspected the sheets: the ugly grayish stain befouled the whiteness of the linen. It had leaked out, again. Indignation erased the unpleasant memory of Mahogany House. Damn it! This wasn’t an enemy he could defeat like the hundreds, the thousands he had confronted and conquered over the years, buying them, intimidating them, killing them. This lived inside him, flesh of his flesh, blood of his blood. It was destroying him at precisely the time he needed to be stronger and healthier than ever.

…..
Bullshit! The great mistake of my life has been my family. My brothers, my own wife, my children. Have you ever seen disasters like them? Their only horizon is booze, pesos, and fucking. Is there one of them capable of continuing my work? Isn’t it a shame that at a time like this, Ramfis and Radhamés are playing polo in Paris instead of standing at my side?

…..
Dear God, do this for me. Tonight I need to fuck Yolanda Esterel right. So I can know I’m not dead. Not an old man. And can go on doing your work for you, moving this damn country of assholes forward. I don’t care about the priests, the gringos, the conspirators, the exiles. I can clear away all that shit myself. But I need your help to fuck that girl. Don’t be a miser, don’t be stingy. Give me your help, give it to me.

…..
The secret to happiness, at least to peace of mind, is knowing how to separate sex from love. And, if possible, eliminating romantic love from your life, which is the love that makes you suffer. That way, I assure you, you live with greater tranquility and enjoy things more.

…..
But a moment later, when we said goodbye, she forgot her marital precautions and instead of her cheek she offered me her lips. They were full and sensual, and in the seconds I had them pressed against mine, I felt them move slowly, provocatively, in a supplementary caress. When I already had crossed Saint-Germain on the way to my hotel, I turned to look at her and she was still there, on the corner by Les Deux Magots, a bright, golden figure in white shoes, watching me walk away. I waved goodbye and she waved the hand holding the flowered parasol. I only had to see her to discover that in these past few years I hadn't forgotten her for a single moment, that I loved her as much as I did the first day.

…..
Felícito Yanaqué, the owner of the Narihualá Transport Company, left his house that morning, as he did every morning Monday to Saturday, at exactly seven thirty, after doing half an hour of qigong, taking a cold shower, and preparing his usual breakfast: coffee with goat's milk and toast with butter and a few drops of raw chancaca honey. He lived in the center of Piura, and on Calle Arequipa the noise of the city had already erupted, the high sidewalks filled with people going to the office or the market, or taking their children to school. Some devout old women were on their way to the cathedral for eight o'clock Mass. Peddlers hawked their wares: molasses candies, lollipops, plantain chips, empanadas, and all kinds of snacks; and Lucindo the blind man, with the alms can at his feet, had already settled in at the corner under the eaves of the colonial house. Everything just as it had been every day from time immemorial.

With one exception: This morning someone had attached to the old studded wooden door of his house, at the height of the bronze knocker, a blue envelope on which the name of the owner, DON FELÍCITO YANAQUÉ, was clearly written in capital letters. As far as he could recall, it was the first time anyone had left him a letter hanging this way, like a judicial notice or a fine. Normally the mailman would slide a letter through the slot in the door. He took down the letter, opened the envelope, and began to read, moving his lips as he did so.

The fact that your Narihualá Transport Company is doing so well is a source of pride for Piura and Piurans. But also a risk, since every successful business is at risk of being ravaged and vandalized by resentful, envious people and other undesirable types, and as you know very well, we have plenty of them here. But don't worry. Our organization will take care of protecting Narihualá Transport, along with you and your worthy family, against any accident, unpleasantness, or threat from criminal elements. Our compensation for this work is $500 a month (a modest sum to protect your inheritance, as you can see). We'll contact you soon regarding forms of payment.

There's no need for us to emphasize the importance of your utmost discretion with regard to this matter. Everything should be kept strictly between us.

May God keep you.