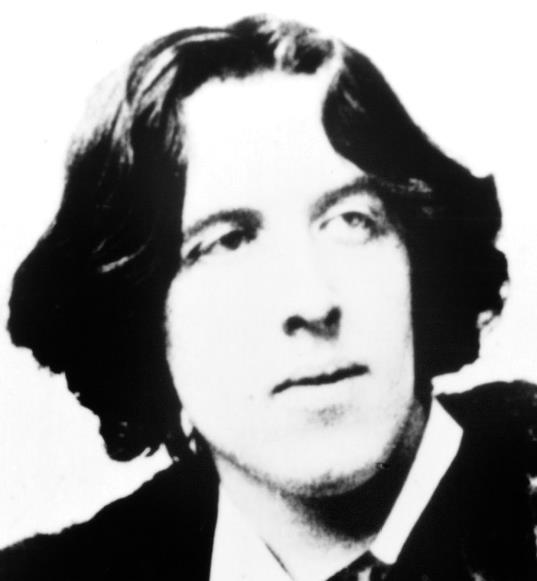 …..
We are all in the gutter, but some of us are looking at the stars.

…..
But there are moments when one has to choose between living one’s own life, fully, entirely, completely - or dragging out some false, shallow, degrading existence that the world in its hypocrisy demands.

…..
Do you know I am afraid that good people do a great deal of harm in this world. Certainly the greatest harm they do is that they make badness of such extraordinary importance. It is absurd to divide people into good and bad. People are either charming or tedious.

…..
I must say to myself that I ruined myself, and that nobody great or small can be ruined except by his own hand. I am quite ready to say so. I am trying to say so, though they may not think it at the present moment. This pitiless indictment I bring without pity against myself. Terrible as was what the world did to me, what I did to myself was far more terrible still.

…..
And the first thing that I have got to do is to free myself from any possible bitterness of feeling against the world.  I am completely penniless, and absolutely homeless. Yet there are worse things in the world than that. I am quite candid when I say that rather than go out from this prison with bitterness in my heart against the world, I would gladly and readily beg my bread from door to door.

…..
When first I was put into prison some people advised me to try and forget who I was. It was ruinous advice. It is only by realising what I am that I have found comfort of any kind. Now I am advised by others to try on my release to forget that I have ever been in a prison at all. I know that would be equally fatal. It would mean that I would always be haunted by an intolerable sense of disgrace, and that those things that are meant for me as much as for anybody else - the beauty of the sun and moon, the pageant of the seasons, the music of daybreak and the silence of great nights, the rain falling through the leaves, or the dew creeping over the grass and making it silver - would all be tainted for me, and lose their healing power, and their power of communicating joy. To regret one's own experiences is to arrest one's own development. To deny one's own experiences is to put a lie into the lips of one's own life. It is no less than a denial of the soul.


The picture of Dorian Gray

The highest as the lowest form of criticism is a mode of autobiography. Those who find ugly meanings in beautiful things are corrupt without being charming. This is a fault.

There is no such thing as a moral or an immoral book. Books are well written, or badly written. That is all.

…..
… After a few moments he said to him, “Have you really a very bad influence, Lord Henry? As bad as Basil says?”

“There is no such thing as a good influence, Mr. Gray. All influence is immoral—immoral from the scientific point of view.”

“Because to influence a person is to give him one’s own soul. He does not think his natural thoughts, or burn with his natural passions. His virtues are not real to him. His sins, if there are such things as sins, are borrowed. He becomes an echo of some one else’s music, an actor of a part that has not been written for him. The aim of life is self-development. To realize one’s nature perfectly—that is what each of us is here for. People are afraid of themselves, nowadays. They have forgotten the highest of all duties, the duty that one owes to one’s self. Of course, they are charitable. They feed the hungry and clothe the beggar. But their own souls starve, and are naked. Courage has gone out of our race. Perhaps we never really had it. The terror of society, which is the basis of morals, the terror of God, which is the secret of religion—these are the two things that govern us. And yet—” …

…“And yet,” continued Lord Henry, in his low, musical voice, and with that graceful wave of the hand that was always so characteristic of him, and that he had even in his Eton days, “I believe that if one man were to live out his life fully and completely, were to give form to every feeling, expression to every thought, reality to every dream—I believe that the world would gain such a fresh impulse of joy that we would forget all the maladies of mediaevalism, and return to the Hellenic ideal—to something finer, richer than the Hellenic ideal, it may be. But the bravest man amongst us is afraid of himself. The mutilation of the savage has its tragic survival in the self-denial that mars our lives. We are punished for our refusals. Every impulse that we strive to strangle broods in the mind and poisons us. The body sins once, and has done with its sin, for action is a mode of purification. Nothing remains then but the recollection of a pleasure, or the luxury of a regret. The only way to get rid of a temptation is to yield to it. Resist it, and your soul grows sick with longing for the things it has forbidden to itself, with desire for what its monstrous laws have made monstrous and unlawful. It has been said that the great events of the world take place in the brain. It is in the brain, and the brain only, that the great sins of the world take place also…”

…..
For the wonderful beauty that had so fascinated Basil Hallward, and many others besides him, seemed never to leave him. Even those who had heard the most evil things against him-- and from time to time strange rumours about his mode of life crept through London and became the chatter of the clubs-- could not believe anything to his dishonour when they saw him. He had always the look of one who had kept himself unspotted from the world. Men who talked grossly became silent when Dorian Gray entered the room. There was something in the purity of his face that rebuked them. His mere presence seemed to recall to them the memory of the innocence that they had tarnished. They wondered how one so charming and graceful as he was could have escaped the stain of an age that was at once sordid and sensual.

Often, on returning home from one of those mysterious and prolonged absences that gave rise to such strange conjecture among those who were his friends, or thought that they were so, he himself would creep upstairs to the locked room, open the door with the key that never left him now, and stand, with a mirror, in front of the portrait that Basil Hallward had painted of him, looking now at the evil and aging face on the canvas, and now at the fair young face that laughed back at him from the polished glass. The very sharpness of the contrast used to quicken his sense of pleasure. He grew more and more enamoured of his own beauty, more and more interested in the corruption of his own soul. He would examine with minute care, and sometimes with a monstrous and terrible delight, the hideous lines that seared the wrinkling forehead or crawled around the heavy sensual mouth, wondering sometimes which were the more horrible, the signs of sin or the signs of age. He would place his white hands beside the coarse bloated hands of the picture, and smile. He mocked the misshapen body and the failing limbs.


The Importance of Being Ernest

…..
LADY BRACKNELL : It is very strange. This Mr. Bunbury seems to suffer from curiously bad health.

LADY BRACKNELL : Well, I must say, Algernon, that I think it is high time that Mr. Bunbury made up his mind whether he was going to live or to die. This shilly-shallying with the question is absurd. Nor do I in any way approve of the modern sympathy with invalids. I consider it morbid. Illness of any kind is hardly a thing to be encouraged in others. Health is the primary duty of life. I am always telling that to your poor uncle, but he never seems to take much notice... as far as any improvement in his ailment goes. I should be much obliged if you would ask Mr. Bunbury, from me, to be kind enough not to have a relapse on Saturday, for I rely on you to arrange my music for me. It is my last reception, and one wants something that will encourage conversation, particularly at the end of the season when every one has practically said whatever they had to say, which, in most cases, was probably not much.

ALGERNON : I'll speak to Bunbury, Aunt Augusta, if he is still conscious, and I think I can promise you he'll be all right by Saturday. Of course the music is a great difficulty. You see, if one plays good music, people don't listen, and if one plays bad music people don't talk. But I'll run over the programme I've drawn out, if you will kindly come into the next room for a moment.


Thy hair is horrible. It is covered with mire and dust. It is like a knot of serpents coiled round thy neck. I love not thy hair. . . . It is thy mouth that I desire Jokanaan. Thy mouth is like a band of scarlet on a tower of ivory. It is like a pomegranate cut in twain with a knife of ivory. The pomegranate-flowers that blossom in the gardens of Tyre, and are redder than roses, are not so red. The red blasts of trumpets that herald the approach of kings, and make afraid the enemy, are not so red. Thy mouth is redder than the feet of the doves who inhabit the temples and are fed by the priests. It is redder than the feet of him who cometh from a forest where he hath slain a lion, and seen gilded tigers. Thy mouth is like a branch of coral that fishers have found in the twilight of the sea, the coral that they keep for the kings! . . . It is like the vermilion that the Moabites find in the mines of Moab, the vermilion that the kings take from them. It is like the bow of the King of the Persians, that is painted with vermilion, and is tipped with coral. There is nothing in the world so red as thy mouth. . . . Suffer me to kiss thy mouth.