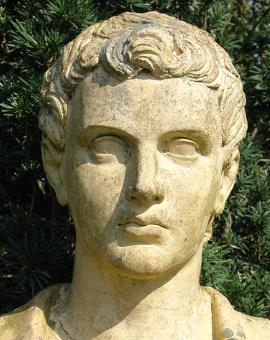 …..
This what I used to pray for: a piece of land, not too big, with a garden, and near to to the house, a constant spring of water and a bit of woodland as well. The gods have granted me these, and more. I am content. I ask for nothing more, Mercury, except that you confirm these gifts as my own.


After a long cessation, O Venus, again are you stirring up tumults? Spare me, I beseech you, I beseech you. I am not the man I was under the dominion of good-natured Cynara. Forbear, O cruel mother of soft desires, to bend one bordering upon fifty, now too hardened for soft commands: go, whither the soothing prayers of youths, invoke you. More seasonably may you revel in the house of Paulus Maximus, flying thither with your splendid swans, if you seek to inflame a suitable breast. For he is both noble and comely, and by no means silent in the cause of distressed defendants, and a youth of a hundred accomplishments; he shall bear the ensigns of your warfare far and wide; and whenever, more prevailing than the ample presents of a rival, he shall laugh [at his expense], he shall erect thee in marble under a citron dome near the Alban lake. There you shall smell abundant frankincense, and shall be charmed with the mixed music of the lyre and Berecynthian pipe, not without the flageolet. There the youths, together with the tender maidens, twice a day celebrating your divinity, shall, Salian-like, with white foot thrice shake the ground. As for me, neither woman, nor youth, nor the fond hopes of mutual inclination, nor to contend in wine, nor to bind my temples with fresh flowers, delight me [any longer]. But why; ah! why, Ligurinus, does the tear every now and then trickle down my cheeks? Why does my fluent tongue falter between my words with an unseemly silence? Thee in my dreams by night I clasp, caught [in my arms]; thee flying across the turf of the Campus Martius; thee I pursue, O cruel one, through the rolling waters.

Steer not too boldly to the deep,

Nor, fearing storms, by treacherous shore


Who makes the golden mean his guide,

Crash to the ground; and thunders smite


In sadness hope, in gladness fear

Your breast. The storms that Jupiter


He chases. Why should rain today

Is pleased sometimes his lyre to play,

Nor bends his bow.


Be brave in trouble; meet distress

With dauntless front; but when the gale

Too prosperous blows, be wise no less,

Not ivory or gilded panel gleams in my

home, nor do beams of Hymettian marble

rest on pillars quarried in farthest Africa, nor


have I, as heir of Attalus, become

unwittingly the owner of a palace, nor for me


But I have loyalty and a kindly vein of

genius, and me, though poor, the rich man

courts. I importune the gods for nothing

more, and of my friend in power


I crave no larger boon, happy enough in my

heel of day, and new moons hasten to wane;


yet thou on the grave's verge dost contract for

the cutting of marble slabs, and, forgetful of

the tomb, dost rear a palace, eager to build out

the coast of the sea that thunders by Baiae,


not rich enough in the mainland shore. What,

that thou tearest down each neighbouring

post that marks thy farm, and in thy greed

dost overleap the boundaries of thy tenants!


Man and wife are driven forth bearing in their

arms their household gods and ragged


And yet no hall more certainly

destined bourne. Why strive for more and


For all alike doth Earth unlock her

bosom--for the poor man and for princes'

sons. Nor could Orcus' minion be bribed by

gold to ferry back Prometheus, the crafty.


Proud Tantalus and the son of Tantalus he

holdeth fast, and, summoned or

unsummoned, lends an ear to free the poor

man when his toils are o'er.

Sermones
…..
In short: whether a peaceful old age waits for me

or death circles with black wings,

rich, poor, at Rome, or if thus chance bids, an exile,

whatever the complexion of my life, I will write.

And cherished forever, now grant what we pray for

At this sacred time,

When Sybilline verses have issued their warning

To innocent boys, and the virgins we’ve chosen,

To sing out their song to the gods, who have shown their

Love for the Seven Hills.

O kindly Sun, in your shining chariot, who

Herald the day, then hide it, to be born again

New yet the same, you will never know anything

Whether you’d rather be known as Lucina,

The Senate’s decrees concerning the wedlock

Of women who’ll bear us more of our children,

The laws of marriage,

So the fixed cycle of years, ten times eleven,

We crowd to three times by daylight, as often,

And you, the Fates, who are truthful in prophecy,

Link happy destinies, as has once been ordained

And let the certain course of events confirm it,

To those that are past.

Let Earth that is fruitful in crops, and in cattle,

Adorn our Ceres with garlands of wheat-ears:

And may Jupiter’s life-giving rain and breezes

Gentle and peaceful Apollo, lay down your arms,

And listen now to the young lads’ supplications:

Luna, crescent-horned queen of the constellations,

Give ear to the girls.

If Rome is your doing, and if from far Ilium

Came that band of people who reached the Tuscan shore,

Those commanded to change their home and their city,

On a lucky course,

Those for whom pious Aeneas, the survivor,

Who passed without injury through the flames of Troy,

Prepared a path to freedom, destined to grant him

Much more than he’d lost:

Then, you divinities, show our receptive youth

Virtue, grant peace and quiet to the old, and give

Children and wealth to the people of Romulus,

Whatever a noble descendant of Venus

And Anchises, asks, with a white steer’s sacrifice,

Let him obtain: a winner in war, merciful

To our fallen foe.

On land, and on sea: they fear the Alban axes,

Now the once proud Indians, now the Scythians

Beg for an answer.

Dare to return once more, with neglected Virtue,

With her flowing horn.

May Phoebus, the augur, decked with the shining bow,

Phoebus who’s dear to the Nine Muses, that Phoebus

Who can offer relief to a weary body

With his healing art,

May he, if he favours the Palatine altars,

And may Diana, to whom is the Aventine,

And Mount Algidus, accept the entreaties

Of the Fifteen, and attend, and lend a fond ear,

To these children’s prayers.

We bear to our home the fine hope, and certain,

That such is Jupiter’s, and all the gods’ purpose:

We’re taught, we, the chorus, to sing praise of Phoebus,