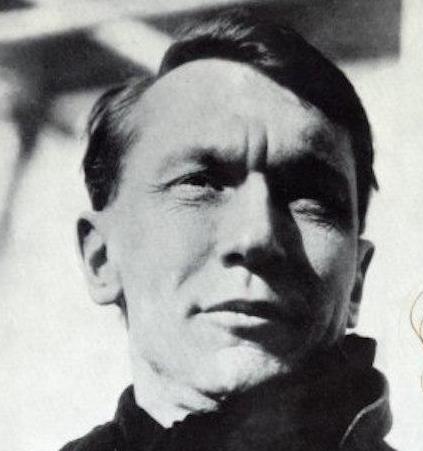 
It is portentous, and a thing of state
That here at midnight, in our little town
A mourning figure walks, and will not rest,
Near the old court-house pacing up and down.

Or by his homestead, or in shadowed yards
He lingers where his children used to play,
Or through the market, on the well-worn stones
He stalks until the dawn-stars burn away.

A bronzed, lank man! His suit of ancient black,
A famous high top-hat and plain worn shawl
Make him the quaint great figure that men love,
The prairie-lawyer, master of us all.

He cannot sleep upon his hillside now.
He is among us: -- as in times before!
And we who toss and lie awake for long
Breathe deep, and start, to see him pass the door.

His head is bowed. He thinks on men and kings.
Yea, when the sick world cries, how can he sleep?
Too many peasants fight, they know not why,
Too many homesteads in black terror weep.

The sins of all the war-lords burn his heart.
He sees the dreadnaughts scouring every main.
He carries on his shawl-wrapped shoulders now
The bitterness, the folly and the pain.

He cannot rest until a spirit-dawn
Shall come; -- the shining hope of Europe free;
The league of sober folk, the Workers' Earth,
Bringing long peace to Cornwall, Alp and Sea.

It breaks his heart that kings must murder still,
That all his hours of travail here for men
Seem yet in vain. And who will bring white peace
That he may sleep upon his hill again?

The Saints smiled gravely and they said: “He’s come.”

Lurching bravoes from the ditches dank,

Drabs from the alleyways and drug fiends pale—

Unwashed legions with the ways of Death—

Every slum had sent its half-a-score

The round world over. (Booth had groaned for more.)

Every banner that the wide world flies

Bloomed with glory and transcendent dyes.

Big-voiced lasses made their banjos bang,

Tranced, fanatical they shrieked and sang:—

“Are you washed in the blood of the Lamb?”

Hallelujah! It was queer to see

On, on upward thro’ the golden air!

Booth died blind and still by Faith he trod,

Eyes still dazzled by the ways of God.

Booth led boldly, and he looked the chief

Unabated in that holy land.

Jesus came from out the court-house door,

Stretched his hands above the passing poor.

Booth saw not, but led his queer ones there

Round and round the mighty court-house square.

Yet in an instant all that blear review

And blind eyes opened on a new, sweet world.

Drabs and vixens in a flash made whole!

Gone was the weasel-head, the snout, the jowl!

Rulers of empires, and of forests green!

[GRAND CHORUS OF ALL INSTRUMENTS, TAMBOURINES TO THE FOREGROUND]

The hosts were sandalled, and their wings were fire!

But their noise played havoc with the angel-choir.

O shout Salvation! It was good to see

Kings and Princes by the Lamb set free.

The banjos rattled and the tambourines

Jing-jing-jingled in the hands of Queens.

And when Booth halted by the curb for prayer

He saw his Master thro’ the flag-filled air.

Christ came gently with a robe and crown

For Booth the soldier, while the throng knelt down.

He saw King Jesus. They were face to face,

And he knelt a-weeping in that holy place.

Are you washed in the blood of the Lamb?


The Congo
…..
Listen to the yell of Leopold's ghost

Burning in Hell for his hand-maimed host.

Hear how the demons chuckle and yell

Cutting his hands off, down in Hell.

Listen to the creepy proclamation,

Blown through the lairs of the forest-nation,

Blown past the white-ants' hill of clay,

Blown past the marsh where the butterflies play:—

"Be careful what you do,


The North Star Whispers to the Blacksmith's Son

THE North Star whispers: "You are one

Of those whose course no chance can change.

You blunder, but are not undone,

Your spirit-task is fixed and strange.

"When here you walk, a bloodless shade,

A singer all men else forget.

Your chants of hammer, forge and spade

Will move the prarie-village yet.

Beholds your fancies on her walls,

And paints them out or tears them down,

Or bars them from her feasting halls.

"Yet shall the fragments still remain;

Yet shall remain some watch-tower strong

That ivy-vines will not disdain,

Haunted and trembling with your song.

"Your flambeau in the dusk shall burn,

Your ghost in gleaming robes return

And burn a deathless incense here."

THE moon's a steaming chalice,

A little of it sipped by night

But oh, my reckless lovers,

They drain the cup and wail,

Die at my feet with shaking limbs

And tender lips all pale.

Above them in the sky it bends

Empty and gray and dead.

Each day is coronation time,

You have no humble hours.

To beat the blue-grass spears,

To scorn the lawn-mower that would be

Your yellow heads are cut away,

It seems your reign is o'er.

By noon you raise a sea of stars

More golden than before.

IV
…..
Every soul
Resident
In the earth's one circus tent!
Every man a trapeze king
Then a pleased spectator there.
On the benches! In the ring!
While the neighbors gawk and stare
And the cheering rolls along.
Almost every day a race
When the merry starting gong
Rings, each chariot on the line,
Every driver fit and fine
With a steel-spring Roman grace.
Almost every day a dream,
Almost every day a dream.
Every girl,
Maid or wife,
Wild with music,
Eyes agleam
With that marvel called desire:
Actress, princess, fit for life,
Armed with honor like a knife,
Jumping thro' the hoops of fire.
(Listen to the lion roar!)
Making all the children shout
Clowns shall tumble all about,
Painted high and full of song
While the cheering rolls along,
Tho' they scream,
Tho' they rage,
Every beast in his cage,
Every beast in his den,
That aforetime troubled men.
…..


The Broncho That Would Not Be Broken

A little colt — broncho, loaned to the farm

To be broken in time without fury or harm,

Yet black crows flew past you, shouting alarm,

The butterflies there in the bush were romancing,

The smell of the grass caught your soul in a trance,

So why be a-fearing the spurs and the traces,

O broncho that would not be broken of dancing?

Who danced, through the ages, in corridors golden.

In all the wide farm-place the person most human.

You spoke out so plainly with squealing and capering,

With whinnying, snorting, contorting and prancing,

As you dodged your pursuers, looking askance,

With Greek-footed figures, and Parthenon paces,

The insolent sparrows called from the shed

"If men will not laugh, make them wish they were dead."

But arch were your thoughts, all malice displacing,

You bantered and cantered away your last chance.

And they scourged you, with Hell in their speech and their faces,


"Nobody cares for you," rattled the crows,

As you dragged the whole reaper, next day, down the rows.

The three mules held back, yet you danced on your toes.

You pulled like a racer, and kept the mules chasing.

You tangled the harness with bright eyes side-glancing,

While the drunk driver bled you — a pole for a lance —

And the giant mules bit at you — keeping their places.

The hot wind came down like a sledge-hammer stroke.

The blood-sucking flies to a rare feast awoke.

And they searched out your wounds, your death-warrant tracing.

And the merciful men, their religion enhancing,

Stopped the red reaper, to give you a chance.

Then you died on the prairie, and scorned all disgraces,