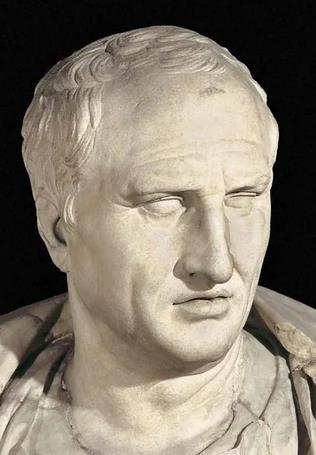 …..
When, O Catiline, do you mean to cease abusing our patience? How long is that madness of yours still to mock us? When is there to be an end of that unbridled audacity of yours, swaggering about as it does now? Do not the nightly guards placed on the Palatine Hill—do not the watches posted throughout the city—does not the alarm of the people, and the union of all good men—does not the precaution taken of assembling the senate in this most defensible place—do not the looks and countenances of this venerable body here present, have any effect upon you? Do you not feel that your plans are detected? Do you not see that your conspiracy is already arrested and rendered powerless by the knowledge which every one here possesses of it? What is there that you did last night, what the night before— where is it that you were—who was there that you summoned to meet you—what design was there which was adopted by you, with which you think that any one of us is unacquainted?[2]

Shame on the age and on its principles! The senate is aware of these things; the consul sees them; and yet this man lives. Lives! aye, he comes even into the senate. He takes a part in the public deliberations; he is watching and marking down and checking off for slaughter every individual among us. And we, gallant men that we are, think that we are doing our duty to the republic if we keep out of the way of his frenzied attacks.

You ought, O Catiline, long ago to have been led to execution by command of the consul. That destruction which you have been long plotting against us ought to have already fallen on your own head.

What? Did not that most illustrious man, Publius Scipio, the PontifexMaximus, in his capacity of a private citizen, put to death Tiberius Gracchus, though but slightly undermining the constitution? And shall we, who are the consuls, tolerate Catiline, openly desirous to destroy the whole world with fire and slaughter? For I pass over older instances, such as how Caius Servilius Ahala with his own hand slew Spurius Maelius when plotting a revolution in the state. There was—there was once such virtue in this republic, that brave men would repress mischievous citizens with severer chastisement than the most bitter enemy. For we have a resolution 2 of the senate, a formidable and authoritative decree against you, O Catiline; the wisdom of the republic is not at fault, nor the dignity of this senatorial body. We, we alone,—I say it openly, —we, the consuls are waiting in our duty.

…..
For what is there, O Catiline, that can now afford you any pleasure in this city? for there s no one in it, except that band of profligate conspirators of yours, who does not fear you,—no one who does not hate you. What brand of domestic baseness is not stamped upon your life? What disgraceful circumstance is wanting to your infamy in your private affairs? From what licentiousness have your eyes, from what atrocity have your hands, from what iniquity has your whole body ever abstained? Is there one youth, when you have once entangled him in the temptations of your corruption, to whom you have not held out a swordfor audacious crime, or a torch for licentious wickedness?

What? when lately by the death of your former wife you had made your house empty and ready for a new bridal, did you not even add another incredible wickedness to this wickedness? ButI pass that over, and willingly allow it to be buried in silence, that so horrible a crimem ay not be seen to have existed in this city, and not to have been chastised. I pass over the ruin of your fortune, which you know is hanging over you against the ides of the very next month; I come to those things which relate not to the infamy of your private vices, not to your domestic difficulties and baseness, but to the welfare of the republic and to the lives and safety of us all.

Can the limit of this life, O Catiline, can the breath of this atmosphere be pleasant to you, when you know that there is not one man of those here present who is ignorant that you, on the last day of the year, when Lepidus and Tullus were consuls, stood in the assembly armed; that you had prepared your hand for the slaughter of the consuls and chief men of the state, and that no reason or fear of yours hindered your crime and madness, but the fortune of the republic? And I say no more of these things, for they are not unknown to every one. How often have you endeavoured to slay me, both as consul elect and as actual consul? how many shots of yours, so aimed that they seemed impossible to be escaped, have I avoided by some slight stooping aside, and some dodging, as it were, of my body? You attempt nothing, you execute nothing, you devise nothing that call be kept hid from me at the proper time; and yet you do not cease to attempt and to contrive. How often already has that dagger of yours been wrested from your hands? how often has it slipped through them by some chance, and dropped down? and yet you cannot any longer do without it; and to what sacred mysteries it is consecrated and devoted by you I know not, that you think it necessary to plunge it in the body of the consul.

…..
But most people unreasonably, not to speak of modesty, want such a friend as they are unable to be themselves, and expect from their friends what they do not themselves give. The fair course is first to be good yourself, and then to look out for another of like character. It is between such that the stability in friendship of which we have been talking can be secured; when, that is to say, men who are united by affection learn, first of all, to rule those passions which enslave others, and in the next place to take delight in fair and equitable conduct, to bear each other's burdens, never to ask each other foranything inconsistent with virtue and rectitude, and not only to serve andlove but also to respect each other. I say "respect"; for if respect isgone, friendship has lost its brightest jewel. And this shows the mistake of those who imagine that friendship gives a privilege to licentiousness and sin. Nature has given us friendship as the handmaid of virtue, not as a partner in guilt: to the end that virtue, being powerless when isolated to reach the highest objects, might succeed in doing so in union and partnership with another. Those who enjoy in the present, or have enjoyed in the past, or are destined to enjoy in the future such a partnership asthis, must be considered to have secured the most excellent and auspicious combination for reaching nature's highest good. This is the partnership, I say, which combines moral rectitude, fame, peace of mind, serenity: al lthat men think desirable because with them life is happy, but without them cannot be so. This being our best and highest object, we must, if we desire to attain it, devote ourselves to virtue; for without virtue we can obtain neither friendship nor anything else desirable. In fact, if virtuebe neglected, those who imagine themselves to possess friends will find out their error as soon as some grave disaster forces them to make trial of them. Wherefore, I must again and again repeat, you must satisfy your judgment before engaging your affections: not love first and judge afterwards. We suffer from carelessness in many of our undertakings: in none more than in selecting and cultivating our friends. We put the cart before the horse, and shut the stable door when the steed is stolen, in defiance of the old proverb. For, having mutually involved ourselves in a long-standing intimacy or by actual obligations, all on a sudden some cause of offence arises and we break off our friendships in full career.