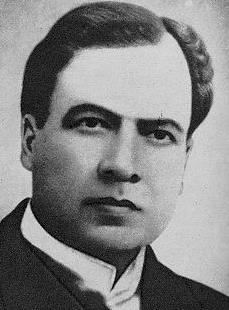 Bagpipes of Spain, ye that can sing

That which is sweetest to us in the Spring!

You first sing of gladness and then sing of pain

As deep and as bitter as the billowed main.

Sing. 'Tis the season! As glad as the rain

My verses shall trip ye a jig or a fling.

Ecclesiastes said it again and again,

All things have their season, O bagpipes of Spain!—

Seasons for to hope and for to despair;

with beak of rose-red agate,

which he opens to the sun like a fan.

His shining neck is curved

He is the swan of divine origin

whose kiss mounted through fields

of silk to the rosy peaks

his triumph illumines the Danube;

Da Vinci was his baron in Italy;

Lohengrin is his blond prince.

His whiteness is akin to linen,

to the buds of white roses,

to the diamantine white

of the fleece of an Easter lamb.

He is the poet of perfect verses,

and his lyric cloak is of ermine;

he is the magic, the regal bird

who, dying, rhymes the soul in his song.

white lilies on a blue field;

and Pompadour, gracious and lovely,

He rows and rows on the lake

where dreams wait for the unhappy,

where a golden gondola waits

for the sweetheart of Louis of Bavaria.

Countess, give the swans your love,

for they are gods of an alluring land

and are made of perfume and ermine,

of white light, of silk, and of dreams.

I found upon the shore a golden shell,

Massive, and with the daintiest pearls embossed;

Europa touched it with her hands divine

When on the heavenly bull the sea she crossed.

I lifted to my lips the sounding shell,

And woke the morning drum-beats of the sea;

I held it to mine ear, the azure mines

Of hidden treasure murmured low to me.

Thus comes to me the salt of those keen gales

The Argo felt within her swelling sails

When Jason's dream the stars of heaven loved well;

An unknown voice 'mid wave-sounds there I find,

A deep sea-swell and a mysterious wind.

(Shaped like a heart it is, that sounding shell).


Song of Autumn in the Springtime

So countless were, could not be told.-

She was a tender child, in this

She seemed a dawn of pure delight;

She smiled as the flowers after rain;

Fashioned of darknesses and pain.

I was timid and childlike shy.

I could not but have been this way:

She, to my love chaste as the sky,

Was Herodias and Salomé…

The other was more sensitive,

With greater will to love and live

Than I ever had hoped to find.

For with her grace of tenderness

A violence of love she had:

In a peplos of loveliness

Was hid a Maenad passion mad…

Wilted in me forever now!

Another fancied my lips were

A casket wrought to hold her love;

And wildly with the teeth of her

To gnaw my very heart she strove.

She willed all passionate excess;

She was a flame of love for me;

She made each ardorous caress

She deemed our flesh a deathless thing,

And on desire an Eden reared,

Forgetting that the flowers of Spring

And of the flesh so soon are seared…

And the others! In many climes,

In so many lands, ever were

Merely the pretext for my rhymes,

Or heart-born fantasies of her.

I sought for the princess in vain,

She that awaited sorrowing.

But life is hard. Bitter with pain.

There is no princess now to sing!

And yet despite the season drear,

My thirst of love no slaking knows;

Gray-haired am I, yet still draw near

The roses of the garden-close….

Ah, but the golden Dawn is mine!

I am the singer who of late put by

The verse azulean and the chant profane,

Across whose nights a rossignol would cry

And prove himself a lark at morn again.

Lord was I of my garden-place of dreams,

Of heaping roses and swan-haunted brakes;

Of gondolas and lilies on the lakes.

And very eighteenth century; both old

And thirsting for illusions infinite.

From childhood it was sorrow that I knew;

My youth-was ever youth my own indeed?-

Its roses still their perfume round me strew,

Their perfume of a melancholy seed-

My youth bestrode a colt without a rein;

Intoxicate I went, a belted blade with me;

If I fell not-'twas God who did sustain.

Within my garden stood a statue fair,

Of marble seeming, yet of flesh and bone;

A gentle spirit was incarnate there

Of sensitive and sentimental tone.

So timid of the world, it fain would hide

And from its walls of silence issue not,

Save when the Spring released upon its tide

The hour of melody it had begot-

The hour of sunset and of hidden kiss;

The hour of gloaming twilight and retreat;

And 'mid the gamut of the flute, perchance,

Would come a ripple of crystal mysteries,

With the intoning of old Latin keys,

With such a sweep, and ardor so intense,

That on the statue suddenly were born

The muscled goat-thighs shaggy and immense,

And o the brow the satyr's pair of horn.

As Gongora's Galatea, so in fine

The fair marquise of Verlaine captured me;

And so unto the passion half divine

Was joined a human sensuality;

All longing and all ardor, the mere sense

Of stage effect or literature's pretence-

If there is ever a soul sincere-'tis mine.

The ivory tower awakened my desire;

I longed to enclose myself in selfish bliss,

Yet hungered after space, my thirst on fire

For heaven, from out the shades of my abyss.

As with the sponge the salt sea saturates

Below the oozing wave, so was my heart,-

Tender and soft,-bedrenched with bitter fates

That world and flesh and devil here impart.

But through the grace of God my conscience

Elected unto good its better part;

If there were hardness left in any sense

It melted soft beneath the touch of Art.

My intellect was freed from baser thought,

My soul was bathed in the Castalian flood,

My heart a pilgrim went, and so I caught

The harmony from out the sacred wood.

Oh, plenteous fountain in whose power is wound

And overcome our destiny malign!

Grove of ideals, where the real halts,

Where flesh is flame alive, and Psyche floats;

The while the satyr makes his old assaults,

And the faun's mouth the tender stalking crops.

There were the god pursues the flying maid,

Where springs the reed of Pan from out the mire,

And wakens the All-Father's mystic choir.

The soul that enters there disrobed should go

A-tremble with desire and longing pure

Over the wounding spine and thorn below,

So should it dream, be stirred, and sing secure.

Life, Light and Truth, as in a triple flame

Art, pure as Christ, is heartened to exclaim;

I am indeed the Life, the Truth, the Light!

The Life is mystery; the Light is blind;

The Truth beyond our reach both daunts and fades;

The sheer perfection nowhere do we find;

The ideal sleeps, a secret, in the shades.

Therefore to be sincere is to be strong.

Bare as it is, what glimmer hath the star;

The water tells the fountain's soul in song

And voice of crystal flowing out afar.

Such my intent was,-of my spirit pure

To make a star, a fountain music-drawn,

With horror of the thing called literature-

And mad with madness of the gloam and dawn.

Of the blue twilight, such as gives the world

Which the celestial ecstasies inspires,

The haze and minor chord,-let flutes be heard!

Aurora, daughter of the Sun,-sound, lyres!

Let pass the stone if any use the sling;

Let pass, should hands of violence point the dart.

The stone from out the sling is for the waves a thing;

Hate's arrow of the idle wind is part.

Virtue is with the tranquil and the braves;

Triumphant over rancor and the grave,

Toward Bethlehem-the caravan goes by!