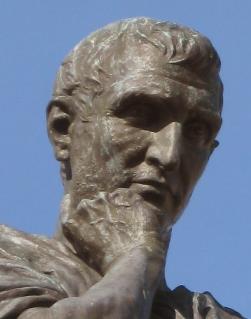 …..
There is one, a bird, which renews itself, and reproduces from itself. The Assyrians call it the phoenix. It does not live on seeds and herbs, but on drops of incense, and the sap of the cardamom plant. When it has lived for five centuries, it then builds a nest for itself in the topmost branches of a swaying palm tree, using only its beak and talons. As soon as it has lined it with cassia bark, and smooth spikes of nard, cinnamon fragments and yellow myrrh, it settles on top, and ends its life among the perfumes.
…..


Bk III: 474-510 Narcissus is changed into a flower
…..
He spoke, and returned madly to the same reflection, and his tears stirred the water, and the image became obscured in the rippling pool. As he saw it vanishing, he cried out ‘ Where do you fly to?  Stay, cruel one, do not abandon one who loves you! I am allowed to gaze at what I cannot touch, and so provide food for my miserable passion!’ While he weeps, he tears at the top of his clothes: then strikes his naked chest with hands of marble. His chest flushes red when they strike it, as apples are often pale in part, part red, or as grapes in their different bunches are stained with purple when they are not yet ripe.

As he sees all this reflected in the dissolving waves, he can bear it no longer, but as yellow wax melts in a light flame, as morning frost thaws in the sun, so he is weakened and melted by love, and worn away little by little by the hidden fire. He no longer retains his colour, the white mingled with red, no longer has life and strength, and that form so pleasing to look at, nor has he that body which Echo loved. Still, when she saw this, though angered and remembering, she pitied him, and as often as the poor boy said ‘Alas!’ she repeated with her echoing voice ‘ Alas! ’ and when his hands strike at his shoulders, she returns the same sounds of pain. His last words as he looked into the familiar pool were ‘Alas, in vain, beloved boy!’ and the place echoed every word, and when he said ‘Goodbye!’ Echo also said ‘ Goodbye! ’

He laid down his weary head in the green grass, death closing those eyes that had marvelled at their lord’s beauty.

And even when he had been received into the house of shadows, he gazed into the Stygian waters. His sisters the Naiads lamented, and let down their hair for their brother, and the Dryads lamented. Echo returned their laments. And now they were preparing the funeral pyre, the quivering torches and the bier, but there was no body. They came upon a flower, instead of his body, with white petals surrounding a yellow heart.

Elegy IX: Of Love and War.

Trust me, my Atticus, in love are wars;

And Cupid has his camp, as well as Mars:

The age that's fit for war best suits with love,

The old in both unserviceable prove,

Infirm in war, and impotent in love.

The soldiers which a general does require,

Are such as ladies would in bed desire:

Who but a soldier, and a lover, can

Bear the night's cold, in show'rs of hail and rain?

One in continual watch his station keeps,

Or on the earth in broken slumbers sleeps;

The other takes his still repeated round

By mistress' house — then lodges on the ground.

Soldiers, and lovers, with a careful eye,

Observe the motions of the enemy:

One to the walls makes his approach in form,

Pushes the siege, and takes the town by storm:

The other lays his close to Celia's fort,

Presses his point, and gains the wish'd-for port.

As soldiers, when the foe securely lies

In sleep, and wine dissolv'd, the camp surprise;

So when the jealous to their rest remove,

And all is hush'd, — the other steals to love.

You then, who think that love's an idle fit,

Know, that it is the exercise of wit.

In flames of love the fierce Achilles burns,

From the embraces of Andromache

H' admir'd the beauties of the prophetess:

The god of war was caught in th' act of love;

A story know to all the court above.

Once did I pass my hours in sloth and ease,

Cool shades and beds of down could only please;

When a commanding beauty rais'd my mind,

I left all little trifling thoughts behind,

And to her service all my heart resign'd:

My time in toils of war, in beauty's tent:

And for so sweet a pay all dangers underwent.

You see, my Atticus, by what I prove,

Who would not live in idleness-must love.

Where's your self-respect? If you won't keep an eye on your wife

for your own sake, then do it for the sake

of increasing my passion. There's nothing more tiresome than fair game,

or more exciting than the out-of-bounds.

The man who could love a licit woman has a heart made of iron.

of love, without the risk of injury?

Corinna, in her wisdom, has seen this weakness in me, and understands

how to keep me in captivity.

She's feigned a million headaches, and sent me dragging my heels home

when she was feeling perfectly all right;

when we both knew that I was innocent.

Then, when she had thus aroused me, prodded my embers into flame,

she once again submitted willingly.

What words of love she whispered! What sweet talk! And, great gods,

what kisses! A profusion of delight!

And as for you, my dear, you who have caught my eye just recently:

avoid entrapment; when you're asked, say "no";

all night long, when there's a heavy frost.

That's the way to keep my love alive and kicking;

that's the nourishment my spirit craves.

like too much cake; let love be lean and hungry!

If Danae had never been confined in a bronze tower, she never

would have been impregnated by Jove.

And Io, transformed and horned, was all the more attractive to Jove

when Juno kept her guarded day and night.

If a man desires what is his for the taking, let him pick leaves from the trees,

gulp river-water by the bucketful!

(wait! what am I saying? where does this leave me?)

I'll say it again, to hell with the consequences: submissiveness is boring;

I flee when I'm pursued, pursue when fled.

But as for you, absentminded guardian of a gorgeous woman:

take my advice, and lock her door at night.

Pay attention! Ask questions! What was that rustling sound at her window?

What made the dogs begin to bark at midnight?

What are those letters her maid is always carrying back and forth?

Why does she always ask to sleep alone?

If you took the time to think about it, you'd be sick with worry,

and there would be some point to my deceit.

as stealing sand from a deserted beach.

I'm warning you now: if you don't start supervising your wife

I've put up with so much for so long, persisting in the hope

that you would open your eyes, so I could pull

the wool over them. But you're so docile, enduring the unendurable!

Your apathy is killing my appetite.

Am I supposed to just walk right in, with no one blocking the way?

Sleep all night, untroubled by the fear

of vengeance, never to wake in terror, gasping for breath?

Why won't you make me wish that you were dead?

What good is a husband who's so easygoing he's practically her pimp?

Our pleasure is ruined by this negligence.

Why don't you find yourself another rival, one who can tolerate tolerance;

I won't stay unless I'm asked to leave.

Who’d dare reveal to the impious the secret rites of Ceres,

or uncover the high mysteries of Samothrace?

but speaking of what’s kept secret’s a heinous crime.

O it’s good if that babbler Tantalus, clutching at fruit in vain,

thirsts in the very middle of the waters!

Venus, above all, orders you to be silent about her rites:

I warn you, let no idle chatterers come near her.

Though the mysteries of Venus are not buried in a box,

nor echo in the wide air to the clash of cymbals,

but are busily enjoyed so, by us all,

they still wish to be concealed among us.

Venus, herself, when she takes off her clothes,

covers her sex with the half-turned palm of her left hand.

Beasts couple indiscriminately in full view: from this sight

girls of course turn aside their faces, too.

and shameful things are hidden under the sheets:

and if not darkness, we seek some veiling shadow,

and something less exposed than the light of day.

Even back then, when roofs kept out neither rain nor sun,

and the oak-tree provided food and shelter,

pleasure was had in woods and caves, not under the heavens:

such care the native peoples had for their modesty.

but now we advertise our nocturnal acts,

and nothing’s bought if it can’t be boasted of!

No doubt you’ll look out every girl, whatever,

to say to whom you please: ‘She too was mine,’

and there’ll be no lack of those you can point out,

so for each that’s mentioned there’s a shameful tale?

Little to cry at: some invent, what they’d deny if true,

and claim there isn’t one they haven’t slept with.

If not their bodies, they touch what they can, their names,

and the reputation’s gone, though the body’s chaste.

too late, locked with a hundred heavy bars!

What’s safe, when adulterers give out her name,

and want what never happened to be believed?

I’m wary even of professing to genuine passions,

and, trust me, my secret affairs are wholly hidden.