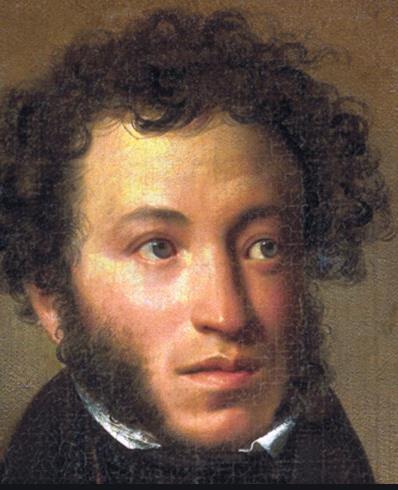 In desert, withered and burned,

On ground that is dry and sultry,

Anchar, alone in the world,


The nature of the thirsty land,

Has borne him on the day of terror,

And flesh of roots and boughs, dead,

Was filled with venom blood forever.


The poison oozes through his bark

And melts at noon in beams from heaven,

And thickens in the evening dark--

A tar, transparent one and heavy.


And birds don't visit him at all,

Not any tiger for him wishes

And only, sometimes, comes a whirl,

To fly away, but as pernicious.


And if, by chance, a cloud sprays

His leaves in wandering alone,

From all his twigs, the poisoned rains

Pour into scorching sand and stone.


But once a man had sent a man,

To desert -- to the poison demon,

And by the morn he brought the venom.


He brought the resin of the death,

A twig with faded leaves, by morning,

And heavy sweat, on his pale face,

In icy rivulets was rolling.

In shadow of the tent, in fluster,

The slave had died by the feet

Of his inexorable master.

The evil tar into his arrows,

And sent with them the poison-death,

To alien lands--the lands of neighbors.

My voice for you is languid, low and light,

Troubling the silence of the dark, late night.

A sullen candle at the pillow's verge

Glows; and my verses murmurously merge

And gush; the brooks of love flow full of you

And in the darkness that your eyes shine through

To smile at me, there are the sounds i hear:

Flee, begone, vanish from my sight,
Oh, ye feeble princess of Cythera
Thou, lofty muse of Liberty,
Where art thou, bane of kings, come nearer!
A garland of flowers from me wrench,
Smash down with hands the coddled lyre…
I sing of Freedom’s victorious fire
Chastised vice enthroned on royal bench.

Reveal to me the noble path
Of the self aggrandized Gaul
In whom amidst famed catastrophe
Thou inspired hymns audacious
Nurslings of frivolous Destiny,
Tyrants of the world! Tremble!
And ye, take heart and pay attention,
Rise up, trampled slaves!

There only upon the royal head
The nation’s quilt has not come to lie
Where potent with sacred Liberty
Is powerful laws’ association
Where to all is offered their firm shield
Where, grasped by steadfast hands
Rise up protecting citizens, of equal heads
Their sword glissades without choice

To attack the breach from on high
With righteous force;
Where honesty is their hand
By either eager greed or fear.
Monarchs! To your crown and throne
The law delivers – and not nature;
Ye stand superior above the nation,
Higher still than ye infinite Law.

And woe, misery to the family
Where it hotheadedly slumbers,
Where for nations or for kings
It is feasible to override the laws!
Thee I assemble you all to witness,
Oh, martyr of infamous fallacies,
Who for an ancestry in rebellious storms
Lay down his sovereign head.

Up steps Louis to his death
In full view of voiceless progeny,
Without his crown he bowed his head
To the bloody scaffold of Mutiny.
Mute the Law –mute the nation,
There swings the unlawful ax…
And lo – a corrupted purple
Lies like all shackled Gaul.

Autocratic Miscreant!
Thee, thy throne I detest,
Descent means thy children’s death
With savage delight I see.
Nations perceive upon thy brow
The sign of execration,
Thou [art] the horror of the world, a disgrace of nature,
A rebuke to God on earth.£

When on the murky Neva
The star of midnight shone
And the worry free head
Subdued sleep weighs down
The thoughtful singer gazes
Upon the threatened sleeping midst the haze
Abandoned monument of the tyrant,
The palace deserted to oblivion –

Echoes of terror, Cleo’s voice erupts
Behind fortresses a summons tolling
Caligula’s last hour beckons us
Before he sees a vivid fate unrolling,
He sees, in ribbons and in stars
By poison and with wine befuddled,
The secretive assassins huddled
Insolent faces over fear filled hearts.

Henceforth, oh, kings learn, and know this true:
That neither flattery nor halters
Make sturdy barricades for you,
Neither prison walls, nor holy altars.
Be ye first to bow your head down
Beneath the canopy of Law eternal.
The people joyous, their freedom vernal
Will forever save the nation’s crown.

My blood is boiling with desire,

your heart is pounding next to mine.

Oh kiss me, kiss me more, your fire

is sweeter than perfume and wine.


Lie next to me my love, my dearest

until the sun makes it’s appearance.

Our dreams will be so lush and sweet

‘til shadows of the night recede.


Do not sing, my beauty, to me

the saddening melodies of Georgia:

they flood my soul with memory

of bygone days and their misfortune.


Alas! They bring back to my mind

the gloomy pictures of departed:

the steppe, the moon and in the night


I see her lovely tragic shape,

but you appear – she’s fading out.

an image in the hazy cloud.

the saddening melodies of Georgia:

they flood my soul with memory

of bygone days and their misfortune


I've lived to bury my desires


I've lived to bury my desires
and see my dreams corrode with rust
now all that's left are fruitless fires
that burn my empty heart to dust.

Struck by the clouds of cruel fate
My crown of Summer bloom is sere
Alone and sad, I watch and wait
And wonder if the end is near.

As conquered by the last cold air
When Winter whistles in the wind
Alone upon a branch that's bare
A trembling leaf is left behind.”


When the loud day for men who sow and reap

Grows still, and on the silence of the town

The unsubstantial veils of night and sleep,

The meed of the day's labour, settle down,

Then for me in the stillness of the night

The wasting, watchful hours drag on their course,

And in the idle darkness comes the bite

Of all the burning serpents of remorse;

Are swarming in my over-burdened soul,

And Memory before my wakeful eyes

With noiseless hand unwinds her lengthy scroll.
Then, as with loathing I peruse the years,

I tremble, and I curse my natal day,

But cannot wash the woeful script away.

Oppress me like some hazy morning-after.
But sadness of days past, as alcohol -

The more it age, the stronger grip the soul.
My course is dull. The future's troubled ocean
Forebodes me toil, misfortune and commotion.

But no, my friends, I do not wish to leave;

I'd rather live, to ponder and to grieve -

Amid all care, distress and agitation:

Melt into tears about some fantasy,

And on my sad decline, to ease affliction,

May love yet show her smile of valediction.


Not long ago, in a charming dream,

I saw myself -- a king with crown's treasure;

I was in love with you, it seemed,

And heart was beating with a pleasure.

I sang my passion's song by your enchanting knees.
Why, dreams, you didn't prolong my happiness forever?

But gods deprived me not of whole their favor:

I only lost the kingdom of my dreams.

For now he seemed to see
The awful Emperor, quietly,
With momentary anger burning,
His visage to Yevgeny turning!
And rushing through the empty square,
He hears behind him as it were
Thunders that rattle in a chorus,
A gallop ponderous, sonorous,
That shakes the pavement. At full height,
Illumined by the pale moonlight,
With arm outflung, behind him riding
See, the bronze horseman comes, bestriding

The charger, clanging in his flight.
All night the madman flees; no matter

Where he may wander at his will,
Hard on his track with heavy clatter
There the bronze horseman gallops still.
Thereafter, whensoever straying
Across that square Yevgeny went
By chance, his face was still betraying
Disturtance and bewilderment.
As though to ease a heart tormented
His hand upon it he would clap
In haste, put off his shabby cap,
And never raise his eyes demented,
And seek some byway unfrequented.
A little island lies in view

Along the shore; and here, belated,
Sometimes with nets a fisher-crew
Will moor and cook their long-awaited
And meager supper. Hither too
Some civil servant, idly floating,
Will come upon a Sunday, boating.
That isle is desolate and bare;
No blade of grass springs anywhere.
Once the great flood had sported, driving
The frail hut thither. Long surviving,
It floated on the water there
Like some black bush. A vessel plying
Bore it, last spring, upon her deck.
They found it empty, all a wreck;
And also, cold and dead and lying
Upon the threshold, they had found

My crazy hero. In the ground
His poor cold body there they hurried,
And left it to God’s mercy, buried.

For shores of home...


For shores of home, so sweet but distant,

you were to leave the alien place;

the hour was sad and instant,

and tears were running on my face.

With chilly hands, with bitter passion,

I vainly tried to keep you up;

the awful pain of separation

I prayed you to not interrupt.

But you, from the distressing kissing,

betook away your gentle lips,

from lands of sad exile and missing

you called me for another sweeps.

You told me, "in a day of meeting,

under the sky that ever blue,

in shade of olive-trees the kissing

we shall, my friend, begin anew."

But there, alas!, where sky grew hotter

and bluer in a sunny beam,

where olive-trees cast shade on water,

you lay asleep with your last dream.

Your beauty, suffering, your anguish

had vanished in the gravest urn;

with them, the promised kiss had vanished ...

still I am waiting for your turn ...

'Well... the court may come to bother -
What'll I say before the judge?
Hey you brats, go have your mother
Bring my coat; I better trudge...
Show me, where? ' - 'Right there, Dad, farther! '
On the sand where netting ropes
Lay spread out, the peasant father
Saw the veritable corpse.

Badly mangled, ugly, frightening,
Blue and swollen on each side...
Has he fished in storm and lightning,
Or committed suicide?
Could this be a careless drunkard,
Or a mermaid-seeking monk,
Or a merchandizer, conquered
By some bandits, robbed and sunk?

To the peasant, what's it matter!
Quick: he grabs the dead man's hair,
Drags his body to the water,
Looks around: nobody's there:
Good... relieved of the concern he
Shoves his paddle at a loss,
While the stiff resumes his journey
Down the stream for grave and cross.

Long the dead man as one living
Rocked on waves amid the foam...
Surly as he watched him leaving,
Soon our peasant headed home.
'Come you pups! let's go, don't scatter.
Each of you will get his bun.

But remember: just you chatter -
And I'll whip you, every one.'

Dark and stormy it was turning.
High the river ran in gloom.
Now the torch has finished burning
In the peasant's smoky room.
Kids asleep, the wife aslumber,
He lies listening to the rain...
Bang! he hears a sudden comer
Knocking on the window-pane.

Through the clouds, the moon was showing...
Well? the naked man was there,
Down his hair the water flowing,
Wide his eyes, unmoved the stare;
Numb the dreadful-looking body,
Arms were hanging feeble, thin;
Crabs and cancers, black and bloody,
Sucked into the swollen skin.

As the peasant slammed the shutter
(Recognized his visitant)
Horror-struck he could but mutter
'Blast you! ' and began to pant.
He was shuddering, awful chaos
All night through stirred in his brain,
While the knocking shook the house
By the gates and at the pane.

People tell a dreadful rumor:
Every year the peasant, say,
Waiting in the worst of humor
For his visitor that day;
As the rainstorm is increasing,
Nightfall brings a hurricane -
And the drowned man knocks, unceasing,
By the gates and at the pane.