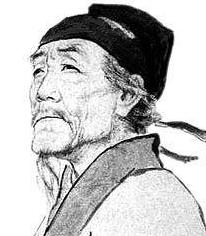 A Song of Fair Women

Many beauties take the air by the Changan waterfront,

Their embroidered silk robes in the spring sun are gleaming --

With a mass of golden peacocks and silver unicorns.

And hanging far down from their temples

And following behind them

Is a pearl-laden train, rhythmic with bearers.

Some of them are kindred to the Royal House --

The titled Princesses Guo and Qin.

Red camel-humps are brought them from jade broilers,

And sweet fish is ordered them on crystal trays.

And the finely wrought phoenix carving-knife is very little used,

Fleet horses from the Yellow Gate, stirring no dust,

...While a solemn sound of flutes and drums invokes gods and spirits,

Guests and courtiers gather, all of high rank;

Dismounts at the pavilion on an embroidered rug.

In a snow of flying willow-cotton whitening the duckweed,

But power can be as hot as flame and burn people's fingers.

Be wary of the Premier, watch for his frown.

Alone in her beauty


Who is lovelier than she?

Yet she lives alone in an empty valley.

She tells me she came from a good family

Which is humbled now into the dust.


When trouble arose in the Kuan district,

Her brothers and close kin were killed.

What use were their high offices,

Not even shielding their own lives? --


The world has but scorn for adversity;

Hope goes out, like the light of a candle.

Her husband, with a vagrant heart,

Seeks a new face like a new piece of jade;


And when morning-glories furl at night

And mandarin-ducks lie side by side,

All he can see is the smile of the new love,

While the old love weeps unheard.


The brook was pure in its mountain source,

But away from the mountain its waters darken.

Waiting for her maid to come from selling pearls

For straw to cover the roof again,


She picks a few flowers, no longer for her hair,

And lets pine-needles fall through her fingers,

And, forgetting her thin silk sleeve and the cold,

She leans in the sunset by a tall bamboo.

On the 19th of the Tenth-month in the second year of Dali, I saw, in the house of the Kueifu official Yuante, a girl named Li from Lingying dancing with a dagger. I admired her skill and asked who was her teacher. She named Lady Gongsun. I remembered that in the third year of Kaiyuan at Yancheng, when I was a little boy, I saw Lady Gongsun dance. She was the only one in the Imperial Theatre who could dance with this weapon. Now she is aged and unknown, and even her pupil has passed the heyday of beauty. I wrote this poem to express my wistfulness. The work of Zhang Xu of the Wu district, that great master of grassy writing, was improved by his having been present when Lady Gongsun danced in the Yeh district. From this may be judged the art of Gongsun.


There lived years ago the beautiful Gongsun,

Who, dancing with her dagger, drew from all four quarters

Heaven and earth moved back and forth, following her motions,

And rapid as angels before the wings of dragons.

And ended like the shining calm of rivers and the sea....

But vanished are those red lips and those pearly sleeves;

And none but this one pupil bears the perfume of her fame,

This beauty from Lingying, at the Town of the White God,

Dancing still and singing in the old blithe way.

And while we reply to each other's questions,

We sigh together, saddened by changes that have come.

There were eight thousand ladies in the late Emperor's court,

But none could dance the dagger-dance like Lady Gongsun.

...Fifty years have passed, like the turning of a palm;

Wind and dust, filling the world, obscure the Imperial House.

Instead of the Pear-Garden Players, who have blown by like a mist,

There are one or two girl-musicians now-trying to charm the cold Sun.

There are man-size trees by the Emperor's Golden Tomb

I seem to hear dead grasses rattling on the cliffs of Qutang.

...The song is done, the slow string and quick pipe have ceased.

At the height of joy, sorrow comes with the eastern moon rising.

And I, a poor old man, not knowing where to go,

Must harden my feet on the lone hills, toward sickness and despair.

Though a country be sundered, hills and rivers endure;

And spring comes green again to trees and grasses

And lonely birds have sung their grief.

...After the war-fires of three months,

One message from home is worth a ton of gold.

...I stroke my white hair. It has grown too thin

To hold the hairpins any more.

A light wind is rippling at the grassy shore....

Through the night, to my motionless tall mast,

The stars lean down from open space,

And the moon comes running up the river.

And free my sick old age from office! --

But a sand-snipe in the wide, wide world!

In a sharp gale from the wide sky apes are whimpering,

Birds are flying homeward over the clear lake and white sand,

Leaves are dropping down like the spray of a waterfall,

While I watch the long river always rolling on.

I have come three thousand miles away. Sad now with autumn

And with my hundred years of woe, I climb this height alone.

Ill fortune has laid a bitter frost on my temples,

Heart-ache and weariness are a thick dust in my wine.


NIGHT IN THE WATCH-TOWER

While winter daylight shortens in the elemental scale

And snow and frost whiten the cold-circling night,

Stark sounds the fifth-watch with a challenge of drum and bugle.

...The stars and the River of Heaven pulse over the three mountains;

I hear women in the distance, wailing after the battle;

I see barbarian fishermen and woodcutters in the dawn.

Hush for a moment, O tumult of the world.


Taking Down a Trellis

The sticks I tied already wither and fall,

The pumpkin leaves are getting sparse and thin.

It's lucky that the white flowers fully grew,

You have to help the green vines fade away.

There's no end to the sound of insects in autumn,

Whatever's in the minds of the sparrows at dusk?

Now, the world is one of cold and waste;

Human life has its beginning too.

The moon shines in Fuzhou tonight,

In her chamber, she watches alone.

I pity my distant boy and girl-

They don't know why she thinks of Chang'an.

Her cloud-like hair is sweet with mist,

Her jade arms cold in the clear moonlight.

When shall we lean in the empty window,

Together in brightness, and tears dried up?

I remember the temple, this route I've travelled before,

I recall the bridge as I cross it again.

It seems the hills and rivers have been waiting,

The flowers and willows all are selfless now.

The field is sleek and vivid, thin mist shines,

On soft sand, the sunlight's colour shows it's late.

All the traveller's sorrow fades away,

What better place to rest than this?